Some of you may not be familiar with #FreeBabylon5, so here is a short description :

There have been several attempts to revive the interest in the Babylon 5 TV series, including JMS’ attempt to buy back the rights for everything. He already has the rights for a theatrical movie, but can not do much with that.

Come September 2013 he had enough of this and made a not on his Facebook page, saying that he could do no more and encouraging the fans to “be organized and be loud”, in order to get Babylon 5 back on TV screens and streaming services. Babylon 5 has been away from TV screens for over a decade in the US. He (and we, the fans) want casual viewers to be able to stumble across the series.

So – the fans started a campaign – letter writing and attention creating measures. The campaign has already been partly successful. The full 5 year series has been shown on the UK Watch channel, with a trailer referencing #FreeBabylon5, and is currently running in Denmark, Germany and Italy.

I have been participating by giving away FreeBabylon5 stuff at a few conventions, and had some fun with that.

Now on to my draft text for an article for the FreeBabylon5 website :

“This is a personal account of my (Babylon Lurker’s) attendance of Loncon3 also known as Worldcon 2014.

Since I live in the Netherlands this was the first Worldcon I have had available near me since I started to go to conventions.

I met Jan M Schroeder at Phoenix Comicon 2013 and Space City Con 2014, and she provided me with some #FreeBabylon5 treats to give away at conventions.

The first two conventions were small local conventions in Copenhagen, Denmark with 30 – 150 attendees – and I got to give away a bit of this. One Swedish writer saw my “#FreeBabylon5” badge and immediately reacted by saying that B5 is a brilliant show.

The third was Fedcon in Düsseldorf, Germany, a media oriented convention with about 5000 attendees. I did get to give away a fair amount of the #FreeBabylon5 stuff, since I met a fair amount of B5 fans there.

Having gone to bigger conventions I decided to go to Worldcon in London this year with a fair supply. 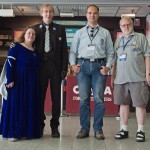 I did not have a table, but just walked around, talking to people. I was slightly surprised by the sheer number of Babylon 5 fans I met there. I must have talked to about 100 people during the 5 days, and my impression is that about 80% of those were B5 fans who happily received the FreeBabylon5 stuff. I am aware that B5 is more popular in the UK than in the US, but among the US people I met the number of fans was high. Essentially everyone knew B5, and many of the non-fans had the show on their to-do list.

I have to assume that this is because Worldcon attendees have a very wide range of Science Fiction interests, books, films, TV, comics etc. I guess I should not have been surprised at all .

On Saturday a Babylon 5 fan meeting was arranged, and in spite of it coinciding with the masquerade we had 40 – 50 people there. Not everyone I met had even heard of the fan meeting. I am sure it could have been bigger if it had been more widely announced.

Jan had indicated that the temporary tattoos were quite popular at SDCC, at Worldcon I found that the #FreeBabylon5 ribbons were more sought after. I ran out of the ribbon supply, but I still have some of the tattoos left, and a few buttons/badges, too.

Loncon 3 has been a very good convention experience in general, and a good B5 fan experience in particular. I will certainly continue being a roving Ambassador/Ranger at other conventions that I will attend.”

In May and June I have been to two conventions , the Fedcon in Düsseldorf, Germany and Fantasticon in Copenhagen, Denmark.

At Fedcon a few Babylon 5 fans went together to make a little happening. You can find a series of pictures of Babylon 5 fans in and out of costume here

At both conventions I was giving away buttons for #FreeBabylon5, a group that campaigns to get Babylon 5 back on TV channels and Internet streaming. You can find more information on the Free Babylon 5 website.

I have participated in a few more of the Downbelow podcasts as a guest, and it has been fun following Heidi and Elisabeth discovering Babylon 5, and their – sometimes – uncanny guesses of what is to come. Of course, they miss greatly form time to time, but they are very observant.

Likely there will be a bit more on those activities later …