I went to this year’s Fedcon. Starting with visiting a few friends in The Netherlands on the way, I arrived at the convention hotel on Thursday afternoon.

None of the group I know very well had arrived yet, so after checking in – this time it went smoothly – I took a bit of rest in the room.

Early evening Dutch friends Annette and Detlev had arrived, and during the evening a few more of the old friends arrived A newcomer to the group, Wolfgang, was also a pleasure to get to know. In a sense the convention had already started.

Friday the official part of the convention started, with panels, Q&As photo-ops and a lot of chats. My friend Melanie, known to me from two Worldcons, also arrived and we went to a few panels together, and were generally hanging out often.

Friday was good fun I had 3 nice encounters.
First of all I got a talk with a physicist who is also writing science fiction on the space travel subject, with the more plausible physics involved. Talked for about half an hour.
Then, at the opening ceremony the ESA people had a surprise for us: They told that a member of the team making presentations could not come due to travel difficulties. We received a video message with her excuse, and it was a good one: She was on the ISS – travel difficulties, indeed 😉
I can now rightfully claim to have received a message from space 😉

After the opening I walked a bit outside, and got to have a short (small talk) with one of the guest actors. A great time was had.
Also, I got to meet a younger fan coming from Florida, and working in Switzerland, dressed up as Spock. A well done costume.

Finally there was a musical show. FEDCON RATPACK, with Vaughn Armstrong, Casey Biggs, Max Grodenchik and Nana Visitor singing and playing nerdy songs played to older music. They really enjoyed doing this, and I enjoyed them quite a bit.

Saturday:
This was (of course) the busy day of the con.
Presentation on new tech visions at Star Trek.
Autograph session in the heat. Got my fav photo of Jonathan Frakes signed, and he seemed to like it.
Steve Dix (Englishman living in Germany): Nerd comedy show, quite amusing.
ESA (space agency): Ask the crew (for their different missions) yes, Q&A. They are very good and it looks like they enjoy coming to Fedcon. Also they had a stand where we could find some (free) stuff, posters, stickers, and a tote bag with pictures of a lot of their space crafts.
Q&A with the 9th Doctor, Christopher Eccleston was very good. Better than I had anticipated
ESA made presentation on the James Webb telescope. A fantastic new instrument that is now starting its work on really deep space imaging in the near infrared spectrum.
Meeting more fans, of course.
It comes through very clearly that the ESA people are as happy coming to the con as we are seeing them here year after year.

Sunday:
This was a more quiet day with some autographs, and a few panels.
The “breakfast panel” with Brent Spiner and Jonathan Frakes was real good fun.

Suddenly the Fedcon is over. Spent all of Sunday evening chatting with other fans.

Monday it was time to go home, and I managed to arrive at my house just before midnight.

The Netherlands is a rather densely populated area, in particular where I live.

Parking problems abound, so how to park your car a bit out of the way ?

During a walk in the centre of The Hague I found this sight : 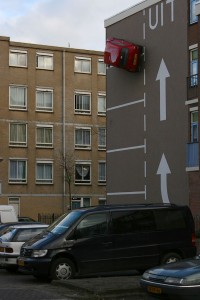 The creativity of the Dutch.

Oh, the slanting parking in relation to the lines is not that un-common 😉

This one I discovered after taking the photo, and checking it out.

I found this rear end of a car “sticking out” from the wall, so took the pic.

At home I found the true irony of it.
Take a look at the “number plate” and then compare with the brand. Yes – I had to laugh. 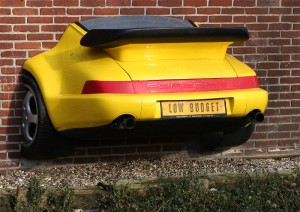 A web story by Joss Whedon.

After having heard most people rave about this little show I finally got the DVD and watched the thing.

The beginning is quite funny, but for me the fun wears off quite quickly. I find it too repetitive and to me that gets boring. I probably have heard too much hype about how hilarious this is.

I have no problem with the production as such, and it probably deserved winning in its Hugo category.

It just did not bring much *to me*.

Sorry about that, guys. Don’t let this take away any of your enjoyment of the show.

I could not help it – this one is *really* ridiculous :