The Kepler space telescope has discovered a most unusual star in its search for exoplanets a long time, but erratic dimming of the light, – up to 20% dimming, which is *a lot*, over a longer period.
There are several hypotheses investigated, including a swarm of comets, or …. just maybe …. a structure built by an alien civilization.

Now, I remember the buzz a few decades ago, when the first pulsars were detected, and some thought the precision of the pulses had to be artificial but – as it turned out – it was a natural phenomenon of a fast rotating neutron star.

I would not jump to the alien conclusion before every other hypothesis has been thoroughly investigated. It could, however become very exciting if all the “natural” hypotheses would have to be discounted …

The article can be found here :

This week’s photo was taken through a 200mm mirror telescope (Schmidt-Cassegrain) functioning as a tele objective with my EOS 20D. 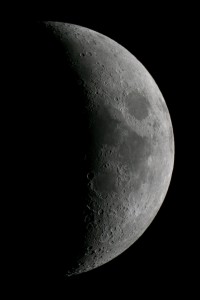 Just under half a moon .

Recently the first Earth like planet outside our own Solar System was found. The article can be found here.

The planet is about twice the diameter of our own Earth with a mass about 5 times that of Earth. We would probably feel rather heavy on that one.

When will we see the next one ? I am sure there are others within our range.

The Spitzer InfraRed Space Telescope, launched a few years ago, has , more or less by accident found the remains of – not one – *but two* rocky planets around a star about 100 light years away.

The two planets, one estimated to be in the order of Earth sized, the other Moon sized , appear to have collided probably a few thousand years ago, very recent in astronomical terms.

More detail can be found at Bad Astronomer Blog

This is, as far as I know, the first, however indirect, evidence of Earth/Moon sized planets.

That is not all : A few days ago it was reported that the Kepler Space Telescope, launched this year, had detected the atmosphere of a planet orbiting another star

On April 23th the most powerful gamma ray burst ever recorded was detected by the Swift telescope. More about can be found here at NASA’s site.

With that type of bursts we look back in time, this time more than 13000 million years, this belongs to the earliest generations of stars in the known Universe. Impressive.