A recent tweet from Straczynski told us that due to some deadlines moved too close, he had to call off the visit to Bogforum (Book Fair) in Copenhagen this year.

He also told us that this was in accord with the organizers of the book fair, and they will try to arrange for this another time.

So my plan of going to the book fair all three days  has changed. I will go there just one day this year.

This cancellation also opens the option of a second arrangement, so it is not all too bad. 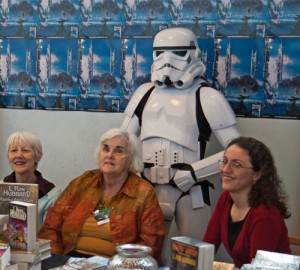 I have written some articles for a Danish science fiction magazine.

Since I have an e-reader I would like to have those available to bring with me.
For an article the process is very simple :
I take the text version of the file and add some headline tags (Simple HTML), make some paragraph markups .
Things come up very readable, and I used a neat text editor for the Mac called “TextWrangler” The editor “understands” Regular Expressions, a hairy Unix way of doing text editing, but I just had to learn a bit of it to do this.

Neat to get my own stuff on the e-reader. I may put more of my stuff on it.

I have – slowly – started to write on an article – my thoughts on the comparison between Star Trek (all series and films) and Babylon 5 for the Danish Trekkies Magazine “Subspace”.